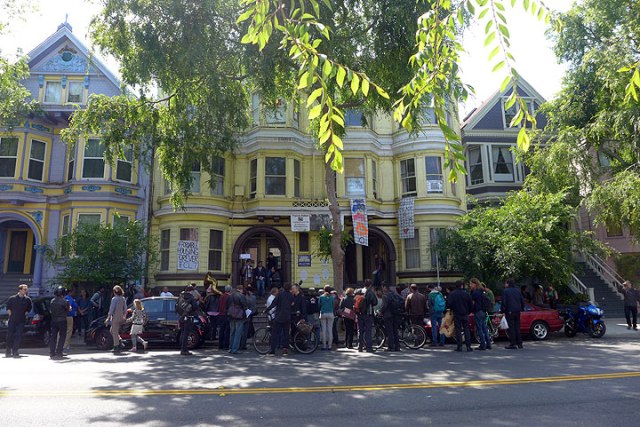 The Pigeon Palace is a non-profit organization founded by the tenants at 2840-2848 Folsom St, in the Mission neighborhood of San Francisco in 2012. Our goal is to further our landlord’s decades-long practice of providing affordable housing to low-income people; in her words, “refusing to choke anybody.” Our landlord Frances was a fan of pigeons. She scoffed at people who considered themselves better than these resourceful birds and she often pointed out the pigeons’ ability to survive hatred, violence and almost any effort to limit their free movement. We are determined to stay in the building at a cost that doesn’t choke anybody. We worked with the San Francisco Community Land Trust (SFCLT) to buy our building.

With the September 2015 closing of the sale, the four occupied units of low-cost housing have been saved forever, while the two additional units (unoccupied at the time of sale) will be preserved as moderate income housing after renovation. The Pigeon Palace has been permanently removed from the speculative real estate market. It can never be sold again, the tenants are virtually eviction-proof, and within a few years the Pigeon Palace will have a 99-year lease from the San Francisco Community Land Trust and will function as a limited equity co-operative housing project.