Who Are the Pigeons? 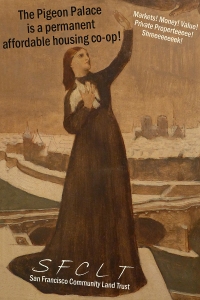 The Pigeon Palace tenants have lived and worked at the frontlines of AIDS services, art and culture, and neighborhood activism for 10, 20, 30, and 40 years. Well established in San Francisco, they are innovators, protectors, and ambassadors of San Francisco Values. Each and all would have already been displaced, evicted from the city they have helped to nurture and inspire, had they not been the beneficiaries of below market value rent. We invite you to read their brief bios and to note the many projects and activities that would never have been possible had these tenants had to pay “normal” rents or had been forced out of the city. The affordable rents they’ve enjoyed at the Pigeon Palace are precisely what made possible this remarkable range of social, cultural, and political activities that have enriched San Francisco for decades.

Since moving to the Mission District of San Francisco in 2008, writer, researcher, and activist, Adriana Camarena has been documenting the stories of the Mission District’s traditional residents: migrants, homies, mammas, homeless, and radicals to name a few. Her project, Unsettlers: Migrants, Homies, and Mammas in the Mission District of San Francisco, relies on a number of storytelling media to collect the narratives of Mission community residents and the sense of place of this former working class and rapidly gentrifying neighborhood. Her stories connect past and ongoing histories of forced displacement, policing, violence, and resistance of the Mission District. In the process of collecting these stories, the storyteller transformed into a neighbor and community organizer, scathed by the same violences experienced by her storytellers. In 2014, Camarena became a community advocate against police brutality by working closely with the Nieto Family, whose son Alex Nieto, was unjustifably killed by SFPD on Bernal Heights. Less than a year later, on February 26th, SFPD unjustifiably gunned down a 21-year-old Guatemalan immigrant—Amilcar Perez Lopez—across the street from the Pigeon Palace. Camarena is part of the block support group who together claim justice for Amilcar.

Chris Carlsson, co-director of the “history from below” project Shaping San Francisco, is a writer, publisher, editor, and frequent public speaker. Carlsson moved to San Francisco in 1978 after growing up in the East Bay, and took up residence in the Mission District in 1987. Since early 2004 he has lived in the Pigeon Palace. Carlsson was one of the founders in 1981 of the seminal and infamous underground San Francisco magazine Processed World. In 1992 Carlsson was one of the co-founders of Critical Mass in San Francisco, which not only led to the boom in bicycling locally but spread across the planet and has been the incubator for transformative urban movements in hundreds of cities, large and small, worldwide. In 1995 Carlsson and his colleagues began work on “Shaping San Francisco”. In the 20 years since then Shaping San Francisco has grown into a multi-faceted project consisting of an incomparable archive of San Francisco history at Foundsf.org, award-winning bicycle and walking tours, and ten years of Public Talks covering history, politics, ecology, art, and more (see shapingsf.org). Carlsson has written three books, including a novel set in a future “post-economic” San Francisco (After the Deluge, Full Enjoyments Books: 2004), and edited six books including three “Reclaiming San Francisco” collections with the venerable City Lights Books. He redesigned and co-authored an expanded Vanished Waters: A History of San Francisco’s Mission Bay after which he joined the board of the Mission Creek Conservancy; he also serves as an advisor to the Shipyard Trust for the Arts at Hunter’s Point. He has given hundreds of public presentations based on Shaping San Francisco, Critical Mass, Nowtopia, Vanished Waters, Hidden San Francisco, and his “Reclaiming San Francisco” history anthologies since the late 1990s, and has appeared dozens of times in radio, television and on the internet.

Keith Hennessy has lived in San Francisco since 1982 and has worked in the Mission for 33 years. A pioneer of queer performance and activist dance since the 80s, Hennessy is one of the most prolific and widely touring of West Coast performing artists. He was a member of the legendary Mission-based performance troupe Contraband (1985-94) and he co-founded 848 Community Space and CounterPulse, vibrant SF centers for experimental dance, and socially engaged performance. Since the early 80s, Hennessy has been involved in Bay Area left and progressive activism, from ACTUP to Occupy, against foreign wars, police brutality, and institutionalized racism and homophobia. In 2000, Keith co-organized the Festival of Resistance which drew over 2000 people to protest the eviction of Dancers’ Group during the first dot com wave of gentrification. In 2008, Keith collaborated with a group of young performers, aged 16-24, including those formerly arrested and incarcerated as youth, to make Delinquent, a poetic challenge to the prison industrial complex. Keith has taught extensively in local universities and independent studios, mentoring multiple generations of artists and activists.

Carin McKay grew up in Northern California and has called San Francisco her home for over 23 years. A community organizer of 19 years, chef, nutritional educator, and small business owner, Carin has cooked food for tens of thousands of people at community events in San Francisco and the greater Bay Area. She is the author of the cookbook “Culinary Magic at Regenerative Design Institute.” She has created farm-to-table events at CounterPulse and led after-school culinary programs at the Excelsior Community School via Project Ole, as well as taught cooking classes in the Mission and Marina. She was a member of Clown Conspiracy, a San Francisco street performance troupe, and has been inspired by 848 Community Space, Cellspace and Food Not Bombs.